reading and writing a life 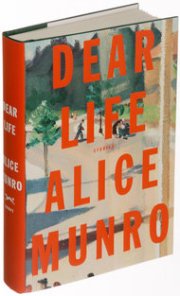 Throughout Alice Munro’s Dear Life, the writer’s brilliant skill in storytelling simultaneously thrilled and humbled me. Her style, though unique and saturated with her own voice, adheres perfectly to those heralded devices that made the modern short story a distinctively modern literary creation. She is succinct in revealing human foibles, regional charm, and the passage of time. Nevertheless, her characters left me feeling cheated of reason, compassion, and utterly bereft of hope. After some three hundred pages, I was sickeningly nostalgic for “and they lived happily ever after”.

As explained by a writing professor whose class I attended in the spring of 2012, the short story must open midway—dropping the audience right in the midst of action effectively translates a sense of motion in progress, as well as ensures brevity. In addition, the professor assured us, this technique demands immediate audience participation. We hit the ground running, so to speak, forced to pursue the rapid succession of stripped-down scenes delivered with sharply precise grammatical genus. Munro achieves exactly this.

Day one of the class, the professor produced a black dry-erase marker and offered a visual of the modern short story’s trajectory for us to consider: a quick, crisp check mark.  Beneath it, she drew a lazy arc: the tired, old ambling trajectory of the novel.  These visuals began to give me math-like anxiety, so I silently refused to copy them down in my notebook.  Even so, the demonstration stayed with me while reading Carver, O’Connor, Cheever, Hemingway, and Updike, to name a few.  Each of these writers convey their own  uniqueness while adhering to that abrupt trajectory, as does Munro.

Likewise, each one of the aforementioned writers brings forth the darker side of human behavior in their stories.  There is an unapologetic lack of promise for happily ever after in these modern short stories, an unflinching focus on the reality that we all possess the ability to harm one another, and that we do great harm to ourselves. In turn, we possess the inclination to justify what harm we do. This is an aspect of realism, a theme that was discussed at length in class. But in those discussions, we barely nicked the surface of why and how, and what implications can possibly be discovered when fiction over-amplifies the dark side of human behavior. Can we go too far? Or, more importantly, why should we?

This deliciously exploited realism that launched mid-century short stories to literary notoriety is not necessarily shocking to someone, like me, who came of age in the 80s, inundated with gorgeous violence in music, and movies utterly dripping with gore. Not since the third grade have I breathlessly awaited the optimistic turn of a potential tragedy and the endearing conclusion of happily every after.

Even so, long before I could articulate this fact, I understood that what makes dark so beautiful is the reality that, just around the edges, somewhere creeping up behind, is the promise of enough light to draw a shadowy line not to be crossed into the deepest of darkness. Such a glimmering edge must exist for us to truly appreciate the dark.

Even O’Connor who is known for defending her preoccupation with “the grotesque”, gave us tales with at least a smidgen of transparency. I find it difficult to locate anything transparent, or redeeming, shimmering at the edges of Munro’s characters. Unlike Carver, O’Connor, and the others, who offer up some idea of the motivations of their protagonists and antagonists, whether it be rage or ignorance, the leads and supporting characters of Munro’s stories carry on without their motivations or possible regrets being revealed.

The young, pretty teacher, the war veteran, the errant housewife-poet, all move along through their stories passively inept, and seemingly unaware that they must demand better of themselves. I found myself wishing that I was still on campus so that I could call up that writing professor and ask for her opinion on Munro’s newest collection of characters. (We never read Munro in that particular class.) I want to demand a discussion: Are the people of Dear Life  an extreme amalgam of Munro’s personal lifelong observations, or can they be considered a general reflection of modern society? Either answer might scar me.

While I  can’t help but admire Munro’s technical precision and obvious master of writing style, I am repulsed and depressed at the very idea that these bits of fiction may hold some truth. I shudder to think there may be people like this in the world.

Almost as shocking as her irredeemable characters, was a response given by Munro in an interview, in which she declares her own belief that these characters have optimistic futures. Many times I’ve fantasized about what happens to a character after I close their book, but I’ve got to say, I don’t see a way out for Munro’s. They just might lack the fortitude to pull themselves out to the muck they fell into. The author did not equip them, or the reader, with enough optimism to draw a lifeline. It’s over.

Call me unsophisticated, but I am left craving transparency, positivity, good old-fashioned hope. Enough with opacity and unjustifiable self-justification! I am homesick for the redeemable.

Maybe I should read a novel.